By integrating high-precision traffic planning with the building-specification operation plan, Toshiba offers you an optimum elevator group control system for your building.

This system will corresponds to the demand by distinguishing the peak hours such as early of working hours and lunch time from the non-peak hours. The latest elevator group control system allows multiple elevators to work together systematically and optimally while providing maximum conveniences to the passengers.

1. Deciding speed
Speed of elevator is generally determined by the number of floor in the building. A general guide is that it should not take more than 30 seconds to travel in between the top and the lowest floors. Decide the optimum speed for the building by applying this basic rule and considering the factors such as building's purpose, characteristics, and service policy.

Relationship between elevator speed and number of floors in building 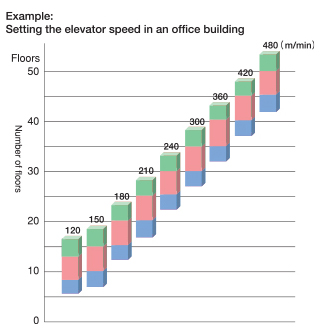 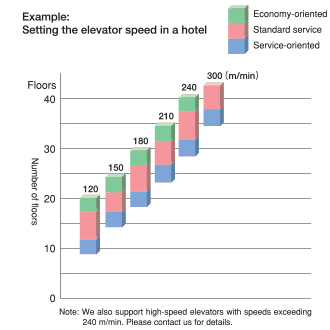 Note that for hotel, approximately two-thirds additional cars need to be allowed as service elevators are not included.

Office building:
Start of office hours set to be peak for traffic demand

Hotel:
Morning hours for check-ins and evening hours when guests leave or go to dinner set to be peak for traffic demand


3. Simulation
The building's traffic demand could be simulated with computer to understand more about the service condition such as average waiting time and chances of long waits. Integrating the result simulation with the traffic calculation to allow for better accuracy planning. The output of the simulation contains the peak hours and the usual service condition. The general values for the simulation are as follows:

Example: Rental office building with demand concentration at 6% of building population per 5 minutes span (during office hours) Average wait times : 30sec or less
Chance of response within 30seconds : 70% or greater
Chance of response after 60 seconds or more : 5% or less

3. Deciding Passenger Capacity
Decision of passenger capacity must be planned with the considerations of peak hours , characteristics of building and make allowance for leeway. Generally, the following plans are recommended:

4. Deciding Service Floor
Office buildings of more than 20 stories are zoned in order to decrease transportation time and improve the rental rates. Zoning refers to dividing elevator service into several zones, and assign group of elevators for each zone. The following point must be take into consideration in order to apply the zone system effectively. Unlike office buildings, a single elevator group is recommended for hotels 40 stories or less to give priority to the first-time users and conveniences. Using a single group elevators, make less hassle for the passengers to select an elevator based on their destination floor, and is also more flexible than zoning. Allow a number of elevators to be used for special occasions temporarily, without greatly affecting the passengers. In additional, if the hotel has banquet halls or wedding chapel, it is advisable to assign escalator or elevator specially for these guests. 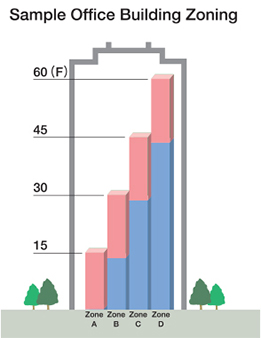 5. Deciding The Layout
Elevator layout has great influences on building's functionality. Thus, the elevator must be installed in such a way that it is easy to use without affecting the performances.

Recommend the examples of elevator layout. 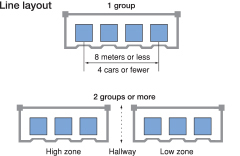 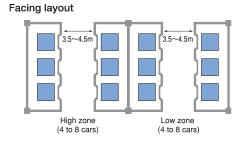 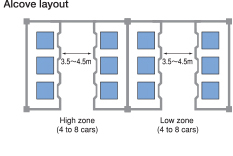